Initiated in December 1999, the Regional Transit Coordination Plan (RTCP) expands upon the Illinois Legislature’s initial impetus for transit coordination as expressed in House Resolution 234 (adopted May 21, 1999). The RTCP is a cooperative effort to enhance regional mobility by facilitating and improving opportunities for interagency travel involving the Chicago Transit Authority (CTA), Metra and Pace. Led by the RTA, in conjunction with the Service Boards and other planning agencies, the RTCP serves as the regional framework for a series of evaluations and recommendations to improve physical coordination, service coordination, fare coordination, and information coordination. The structure of the plan is shown below: 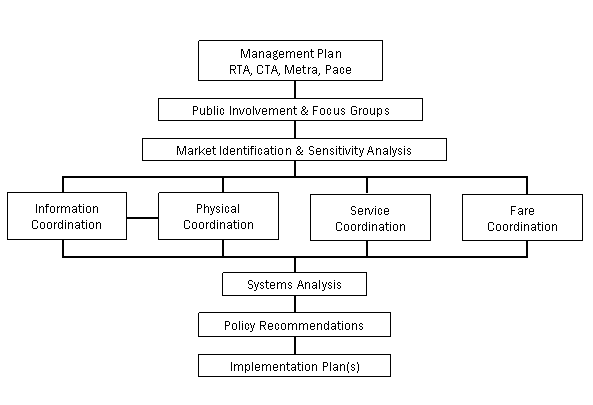 Development of the plan involves a multi-year program of complementary efforts, some of which were initiated prior to the RTCP. Those efforts that are direct products of the plan are summarized in the text that follows.

Initial efforts concentrated on the information gathering components of the plan, especially public involvement, focus groups and market identification. Specific coordination studies were then launched in 2001 and 2002. Those studies were being followed by a systems analysis in order to develop overall policy recommendations and implementation plans.

In accordance with the informal Management Plan, the Service Boards (the CTA, Metra and Pace) have been actively involved in every component of the plan, with overall program management provided by the RTA. Other agencies have been involved as appropriate. For example, the City of Chicago Department of Transportation (CDOT) has been an active participant in several components to date. Other municipalities and transportation agencies included as specific recommendations are considered and implemented.

Public Involvement began with an open-house public meeting in December 1999, when the proposed approach for the RTCP was presented to and discussed with members of the general public and stakeholder groups. Public comments were incorporated into the Proposed Approach Report submitted to the Illinois General Assembly (December 31, 1999). Throughout the year 2000, RTA management and staff made numerous presentations on the RTCP to various committees of the Chicago Area Transportation Study (CATS) and the Northeastern Illinois Planning Commission (NIPC), community and business groups, suburban Councils of Mayors, and other transportation agencies. Area residents have also participated in two rounds of focus groups as described below. Regular updates on the plan were provided in the RTA Reports newsletter.

Public participation has been supplemented by Focus Groups involving both residents and stakeholder representatives. Separate focus groups for residents of the City of Chicago, inner suburbs and outer suburbs were conducted in October 2000 to gather perceptions on transit and interagency transfers. Those sessions were augmented in November 2000 with a stakeholder focus group of community and business leaders from throughout the region, which was a follow-up to interviews conducted with various stakeholder agencies and groups earlier that year. All of the focus groups suggested a need for better coordination of basic transit information, better connections between transit services - especially in the suburbs, and a desire for some sort of universal fare mechanism; so that travelers can best use the entire regional transit system.

A second round of resident focus groups was conducted in June 2002 to test recommendations from the information coordination component aimed at providing better information for transit customers and potential customers. At all transfer locations and for all points of access to the transit system, focus group participants have expressed a preference for agencies to use common symbols, icons and logos to convey an integrated transit system and identity.

In 2004, the RTA conducted additional user-centered design research to better understand how people use transit products, services and environments throughout the region, and to guide specific product improvements. This qualitative field research was conducted at various interagency locations throughout the region, on trips with actual riders, and with individual users of transit products. With this depth of knowledge about customer needs, the RTA has a reliable basis to making key improvements to products under development, and for developing regional passenger information design standards.

As part of the Market Identification and Sensitivity Analysis components of the plan, a transfer Location Study was completed in March 2001 in order to prioritize inter-agency transfer locations for further evaluation. The Location Study identified and classified approximately 300 existing locations throughout the region where it is possible to transfer between two or more transit operators. The study also evaluated another 50 potential locations where transfers could occur based on new rail stations or extensions. Based on the results of this study, three conclusions were established by the project team to guide further coordination efforts. First, it appears that existing transit connections already serve most travel markets to some extent. Second, downtown transfer locations play an important role in regional transit mobility. And third, the project team recommended prioritizing investments in existing locations that either have high rates of transfer activity, or provide critical local or regional connections.

To supplement the Location Study, a survey instrument was developed by the RTA to gauge residents' awareness and opinions regarding various aspects of transit coordination. Telephone interviews were conducted by the University of Illinois at Chicago (UIC) Survey Research Laboratory during the second half of 2002. Responses were recorded from over 1000 residents, with approximately one-third each from the City of Chicago, suburban Cook County and the collar counties (DuPage, Kane, Lake, McHenry and Will). Survey results are being utilized by RTA staff to inform development of improvements within all areas of coordination.

Recognizing that Information Coordination and Physical Coordination are complementary, the RTA initiated an effort to address both categories simultaneously for existing transfer locations. The information and physical coordination study included an assessment of current information practices targeted to transferring passengers and site visits to 75 priority transfer locations in order to determine necessary modifications in both categories. The focus was on content and specific placement of directional and service information, plus any physical site modifications necessary to improve connections. The results were presented to the RTA Board in February 2003.

The information coordination component recommended modifying existing maps, schedules and signs to clearly emphasize interagency transfer opportunities and better direct transferring passengers. The study also proposed new way-finding signage between boarding areas, new local area maps at interagency locations, and a new rail-to-rail connections map showing both Metra and CTA rail lines and stations. To gage customer response for these recommendations, a second round of focus groups was conducted in June of 2002. The results of the focus groups are documented in the Way-Finding Focus Group Report. The RTA has since obtained a federal CMAQ grant to design and implement prototypes of new and refined information products related to interagency travel and to develop design standards for system-wide application.

The focus of the Service Coordination component, presented to the RTA Board in May 2003, was to identify and explore options to better serve important regional travel markets requiring improved connections between components of the existing transit system. Fifteen major activity centers were identified based on total employment, social services, regional attractions, or some combination of these important trip-generating activities. Analysis confirmed that while downtown Chicago destinations are well served by transit from throughout the region, suburban and other outlying city destinations are not so well served by transit. For some targeted travel markets, the study identified minor schedule changes that would be cost-effective ways to improve service coordination. Other travel markets would require service additions, which are more costly and less likely to be cost-effective, at least on an incremental basis.

The Fare Coordination component began with extensive research on fare coordination policies in Northeastern Illinois and elsewhere, including a characterization of the various fare instruments currently available in the RTA region. That research was followed by an effort to establish principles, goals and objectives for improving fare coordination. The RTA subsequently evaluated various approaches for implementation of a universal fare card for use on transit services operated by the CTA, Metra, and Pace. As reported in March 2005 to the Illinois House Special Committee on Mass Transit, implementation of any of these approaches depends on sufficient funds being set aside specifically for this purpose.

The Systems Analysis component, initiated in 2004, evaluated the combined impacts of improvements within all areas of coordination: physical, service, fare and information. Major steps included identifying existing regional travel patterns, characterizing major activity centers, and addressing gaps between travel demand and travel supply. Preliminary results from the systems analysis component were presented to the RTA Board in May 2005, and the Final Report was completed in April 2006.